POLICY ANALYSIS: IMPACT OF THE LOSS OF THE IN-SCHOOL INTEREST SUBSIDY ON LAW STUDENTS

The federal student aid system was created to provide increased access to higher education among Americans otherwise less likely to enroll. The access mission has remained a core value, even as student loans have become the centerpiece of the aid structure.

Until 2012, Subsidized Stafford Loans were available to graduate and professional students who demonstrated sufficient financial need. The interest on these loans was paid by the U.S. Department of Education while the student was enrolled in school at least half-time, during a six-month grace period following separation from school, and during periods of deferment. During the 2011-12 award year, graduate students were eligible to borrow up to $20,500 in the Stafford Loan program each year; for those eligible, the first $8,500 would be deemed a Subsidized Stafford loan.1

For graduate and professional students, the Budget Control Act of 2011 eliminated the in-school interest subsidy on new Stafford loans originated on or after July 1, 2012. Graduate students may still borrow up to $20,500 per year in Unsubsidized Stafford Loans, with an aggregate Stafford Loan limit of $138,500.2 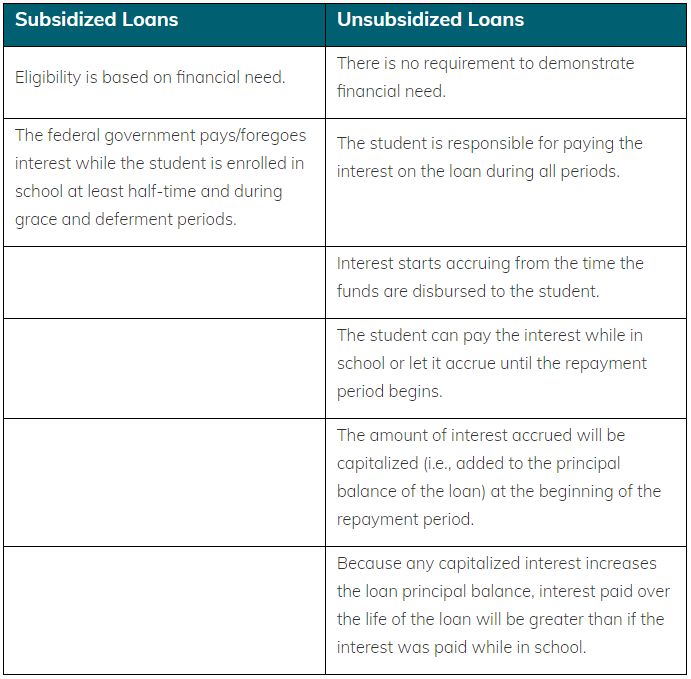 The table below shows the additional principal balance upon repayment for a typical law student (i.e., one who borrows at least $8,500 from the Stafford Loan program each year for three years) due to the loss of the in-school interest subsidy. As the table makes clear, even the lowest interest rate environment will cause law student debt to increase in meaningful ways. 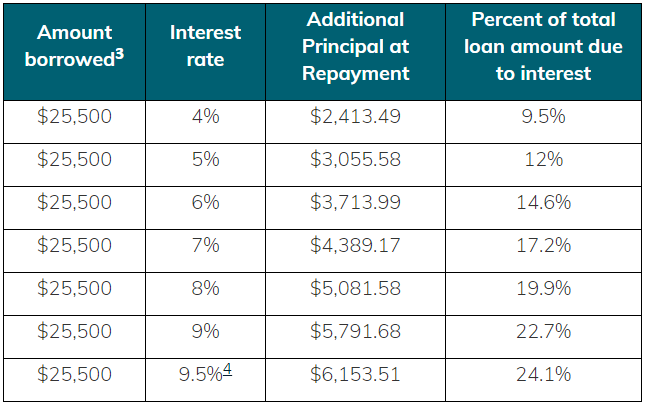 Moreover, the added principal described above would be subject to ongoing interest charges throughout the repayment period, further increasing the overall cost of the debt. For example, at a 6 percent interest rate over a 10-year repayment period, a borrower could pay additional interest in excess of $1,200; if a borrower spread payments over 20 years (common among law student borrowers), the additional interest could increase beyond $2,500.

Law graduates are among the most indebted subgroup of student loan borrowers; but this issue impacts all graduate and professional students with demonstrated financial need. Higher costs can have a discouraging effect on this population, given their cost-sensitivity. Higher costs can also exacerbate the disadvantages financially needy students often face after graduation. Employment outcomes tend to be less favorable for these graduates than others, hampering their ability to manage their student loan debt and build wealth long-term.

And the loss of subsidized loans for graduate students has been recognized by members of Congress as a disincentive for individuals to continue their education. Representative Judy Chu (D-CA-27) has introduced the Protecting Our Students by Terminating Graduate Rates that Add to Debt (POST GRAD) Act5 in response to this problem. The POST GRAD Act would restore parity for undergraduate and graduate education by reinstating graduate students’ eligibility for federal subsidized student loans.

In a society where advanced degrees are required in a large and increasing number of fields, restoration of the in-school interest subsidy would help increase the affordability of, and access to, graduate and professional education, while serving the aims of the federal aid system and benefitting society in the process.

About AccessLex Institute: AccessLex InstituteSM, in partnership with its nearly 200 nonprofit and state-affiliated ABA-approved Member law schools, has been committed to improving access to legal education and to maximizing the affordability and value of a law degree since 1983. The AccessLex Center for Legal Education ExcellenceSM advocates for policies that make legal education work better for students and society alike, and conducts research on the most critical issues facing legal education today. The AccessLex Center for Education and Financial CapabilitySM offers on-campus and online financial education programming and resources to help students confidently manage their finances on their way to achieving personal and professional success. AccessLex Institute is a nonprofit organization with office in West Chester, Pennsylvania, and Washington, D.C. and field offices throughout the U.S.

2No more than $65,500 of this amount may be in subsidized loans. The graduate aggregate limit includes all Stafford loans received for undergraduate study.

3$25,500 represents the $8,500 each year for 3 years that a law student was previously eligible to borrow in Subsidized Stafford Loans.

4The maximum interest rate for Unsubsidized Stafford Loans for graduate and professional students is 9.5 percent.

Webinar - The Road to Zero: A Strategic Approach to Student Loan Repayment