Calls for equity, racial justice, and antiracist work took center stage in 2020 and pervaded industries and sectors, including legal education and the profession. Law schools and related organizations are taking up discussions and initiatives to address the longstanding problems of a underrepresentation and exclusion in the legal profession, which, according to an AccessLex-commissioned report, is about 50 percent less diverse than other professions, such as medicine and dentistry. This is due in part to legal education’s legacy of exclusion and a bar admissions process that has resulted in the marginalization of aspiring lawyers from underrepresented backgrounds. 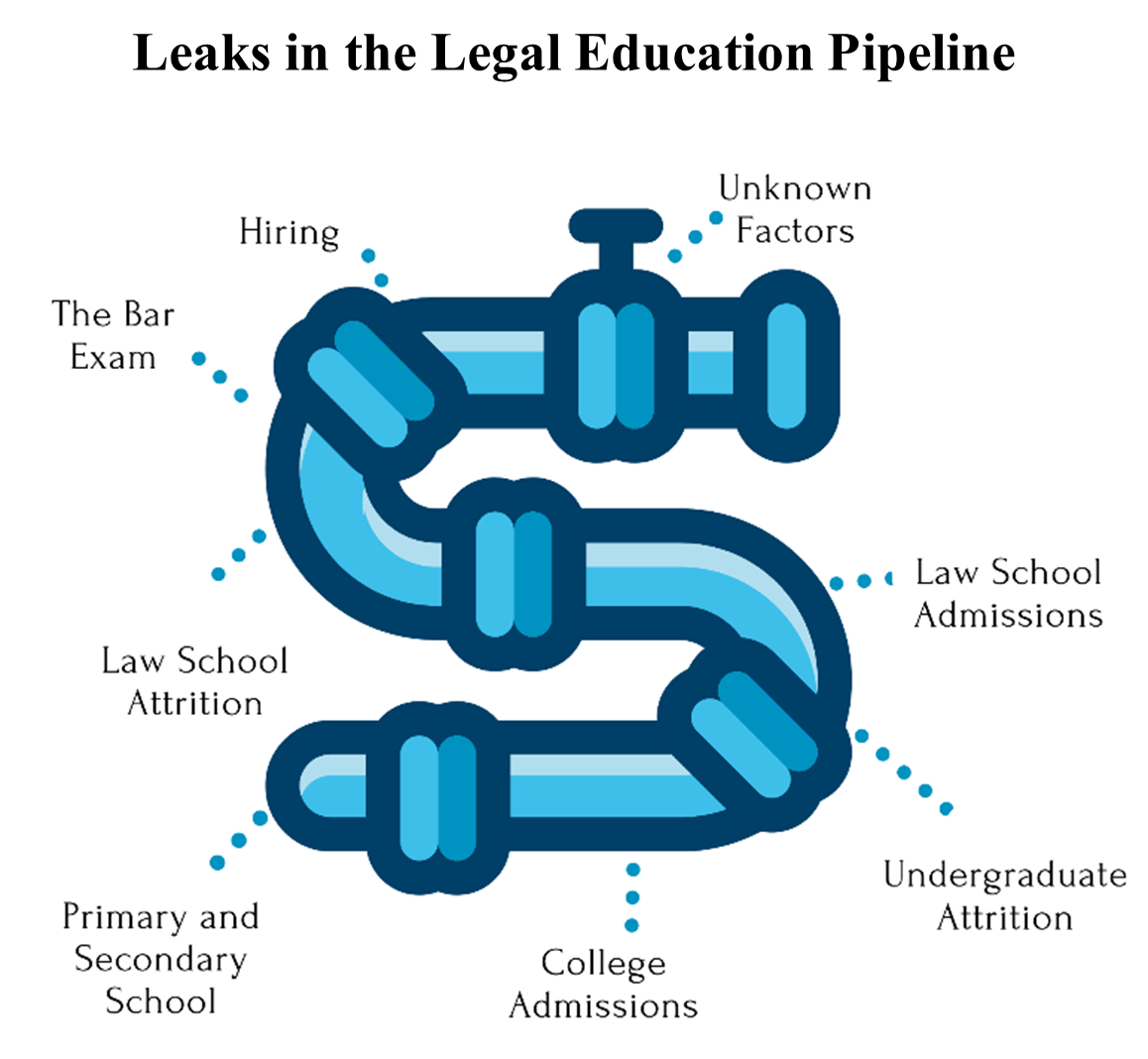 Yet, based on the limited available data, the proportion of practicing lawyers who are people of color has increased by fewer than 3 percentage points, representing only 14.1 percent in 2019. These trends suggest that while more underrepresented students are making their way onto law school campuses, significant barriers to the legal profession exist post-graduation, including the great costs in time and money of bar preparation and exams, and  hiring practices that favor those with means and social capital.

Designing and implementing policies to establish a more equitable post-graduation pipeline requires the measurement and public disclosure of specific rates of exclusion among law school graduates, disaggregated by race and gender. Unfortunately, the availability of this type of data across jurisdictions is very limited. 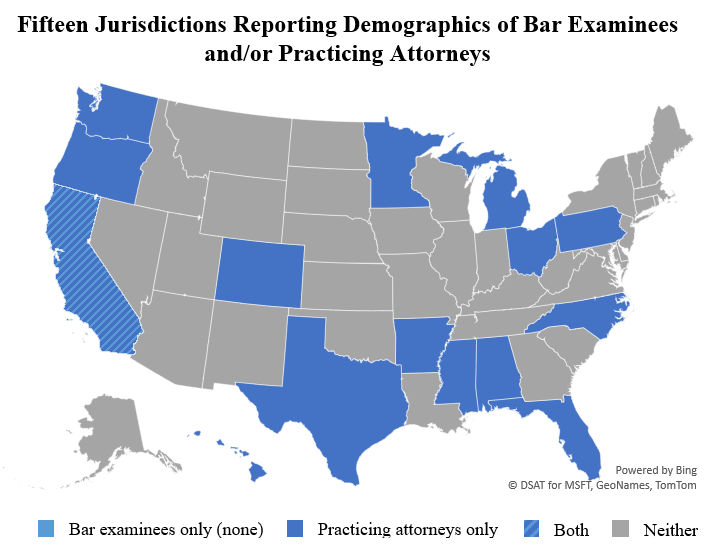 Note: Demographic data on New York bar examinees (from July 2004 to July 2014 and from July 2015 to July 2017) is available as part of two research reports on its adoption of the UBE but, aside from these reports, this data does not appear to be reported; similarly, demographic data on Texas examinees from the July 2004 exam is available via a research report.

The regularity and detail in which this data is reported vary significantly. California, Michigan, and Texas publish this data annually (however, Texas and Michigan only report demographics of practicing attorneys). Others, such as Florida and Oregon, release demographic data on practicing attorneys every two to five years. Most of the jurisdictions do not appear to regularly collect or report demographic information. This irregular reporting severely limits the ability to identify trends across years or to track the impact of new policies and practices, such as changes to bar exam cut scores. Lack of detail can also limit the usefulness of the data. For example, one jurisdiction aggregates all non-White individuals into one “minority” category. This is not a homogeneous group, however. Bar passage rates vary substantially across different racial and ethnic groups and even by gender within these groups. Thus, such use of a single, catchall category limits the insights that can be gleaned from the data.

Some jurisdictions have explained the decision not to collect detailed demographic information from bar examinees by asserting that such disclosures put examinees of color at risk of intentional discrimination. In practice, however, these policies of “colorblindness” often serve to ignore and subtly reinforce disparate outcomes in hiring, licensure, and other domains of law and society. Although the intentions of these policies may be positive, the goals they seek to achieve would be advanced more readily with regular, robust data collection efforts. Moreover, California (the only state that is so far regularly collecting and releasing bar examinee demographic data) has actually used this data to make tangible steps toward a more equitable future, undertaking crucial studies and adjusting their cut score accordingly.

In the past, disaggregated bar passage data was used as the basis of a string of disparate impact cases. These lawsuits were particularly frequent between the 1960s and 1980s; but as described in a recent article, plaintiffs almost always lost, and the lawsuits waned substantially. Concerns about potential litigation may persist, however, possibly   explaining why a 1998 Law School Admission Council (LSAC) study of bar passage demographic trends was based on only 36 of the 50 invited jurisdictions. And, many of those participating did so only on the condition of anonymity. The remaining 14 declined, citing a “lack of interest” in the research questions or “distrust” of how the data would be used. And, over two decades later, only 21 states reported lawyer demographics by race, ethnicity, and gender to the ABA for its 2020 Profile of the Legal Profession.  Because the results of the 2020 Profile are aggregated at the national level, we do not know which jurisdictions participated, thus, we cannot determine the extent to which participating states are representative of the nation as a whole. Further, this dearth of data limits the ability to define actionable and measurable steps toward greater diversity in the legal profession. To make meaningful change, we must shine on diversity issues through the consistent collection and public dissemination of disaggregated bar examinee and lawyer demographic data. This practice is not uncommon for other standardized tests and professional examinations, including the U.S. Medical Licensing Examination. If jurisdictions are hampered in data collection and analysis efforts by a lack of resources, we would ask them to reach out to us.

Some states, such as Wisconsin and South Carolina, have already announced diversity initiatives starting in 2020 that involve the collection and periodic publication of more detailed attorney demographic data. Even if done anonymously through state-aggregated, national-level reporting such as the ABA’s National Lawyer Population Survey, having all jurisdictions commit to sharing attorney demographics would be a great first step. This small act would help shine light on the disparate experiences and outcomes in the licensing of law graduates and provide avenues for action in equitably empowering the next generation of lawyers.  With robust and publicly available data, stakeholders could identify, implement, and assess the efficacy of targeted interventions to improve equity and equality in access to the legal profession.

How Much Does Bar Exam Registration Cost?