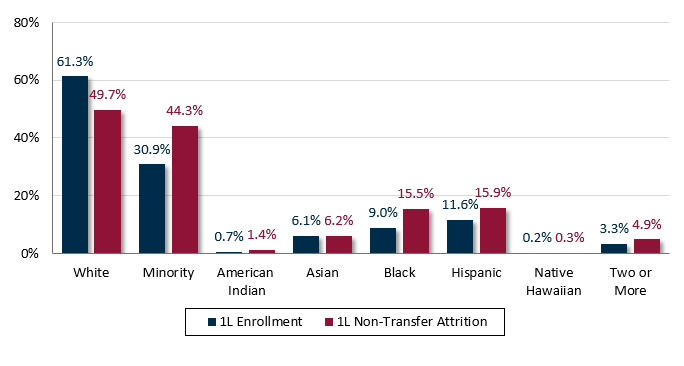 Racial and ethnic disparities in law school admission and enrollment have been well-documented. The extension of these disparities to law school persistence highlights the need for further exploration of the roadblocks minority students face in the first year of law school and the academic support mechanisms offered to overcome them. Law school administrators should evaluate the characteristics of students who leave to better identify and support those who struggle for academic or other reasons. Leveraging campus surveys such as the Law School Survey of Student Engagement (LSSSE) can also help schools investigate challenges minority students experience compared to white students who are more likely to persist.

Further, law schools should strive to regularly assess and enhance their curricula to ensure they are providing inclusive environments where all students can thrive. Some scholars suggest that accounting for culturally diverse viewpoints when teaching and discussing the law can increase academic engagement and sense of belonging among minority law students, 1which can, in turn, encourage enhanced and deeper understanding of the law for all students.

To review and compare attrition data by law school, visit Analytix by AccessLex.

To learn more about our academic and bar success initiatives, visit AccessLex.org.

How Much Does Bar Exam Registration Cost?